In the current development of global low earth orbit (LEO) satellites, four major satellite service providers, led by SpaceX—known for its advanced satellite launch technology, are still at the stage of building infrastructure and verifying technologies. The United States, among all countries, has been very active in the development of the satellite industry. It seems that the space race is back on, along with the communication race. As new opportunities arise, what is the role that Taiwan intends to play and what is the role that Taiwan can play?

At the moment, LEO satellite applications are very mature in military and national defense, while the applications in commercial and civil use are still in early development. In other words, the countries that are in control of global military force will have power over communication platforms in the future. Therefore, realistically, Taiwan has no chance to lead the development. Instead, we should think about who we shall partner with strategically. In my opinion, Taiwan’s opportunity lies in information security-related technologies, and Taiwan should start strategically mapping out the “application side” and “industry chain” for commercial and civil use.

Currently, Taiwan’s communication network, including mobile network coverage, has reached 90% on average. In other words, the remaining 10% coverage is not so appealing to the market as they are areas where base stations cannot be set up because of terrain constraints, such as high mountains.

So, regarding the application side, where should we target?

From my point of view, instead of referring to its own needs while developing an overall strategy, Taiwan should take a broader view and think about what role it wants to play in this big international development topic. From this perspective, we will be able to come up with more ideas and consider different angles before making a strategic plan.

Here are some aspects worth exploring:
1. Taiwan as a global testing ground for applications: allowing some pilot applications to be tested in Taiwan will assist the entire satellite industry in application verification. Taiwan can take this chance to look for technologies and business opportunities that suits it.
2. Greater East Asia satellite alliance: integrating countries in the Greater East Asia region to form a satellite alliance. As the hub of Greater East Asia, Taiwan can well play the role of resource integrator. By leveraging the above mentioned testing ground experience, Taiwan can extend business opportunities to the Greater East Asia region, which will not only make up for its shortcomings in the small market but also increase its international visibility.
3. Opportunity to grasp key specifications: Taiwan’s manufacturers can take this opportunity to familiarize themselves with key specifications, connect the vendors in the aerospace industry with direct buyers overseas, and even make their way to the core group that formulates specification.

Taiwan’s current LEO satellite industry still relies on OEM, especially products for ground stations and terminal mobile devices. Because quantity is the key to the survival of the entire industry chain, all companies have been striving for promotion to gain users.

Take SpaceX’s user terminal for example, customers are charged $499 for the terminal along with a $99 monthly subscription fee. According to the current cost structure, each user terminal cost about $1500 to $2000 to make. However, the price range that SpaceX expects is between $200 and $300.

Taiwan has the advantage of good OEM quality and low gross profit margin, which are the main reasons that it has been a preferred production base for the LEO satellite companies. In addition, as the trade war between China and the US continues, the US’s concerns about information security prevents China from serving as a production base for the global satellite supply chain. These give Taiwan an excellent opportunity.

However, it’s worth thinking about aside from being a pure OEM supplier in the satellite industry, what else can Taiwan offer? Where can we add value to the industry? Can we play a more important role rather than simply being an OEM supplier? The following are some of my ideas, and these are what TMYTEK has been working hard on.

First, what are the problems that need to be solved in the current industry chain, and where is the opportunity?

Whether it is LEO satellite or 5G, millimeter wave (mmWave) frequencies will play a very important role in the next 50 years. These frequencies have been used in niche markets like military and aerospace. How to solve the price and future capacity issues will be the keys to whether this technology can be popularized in the commercial and civil market.

Let’s take Qualcomm's QTM modules for example. They are the most common modules used in 5G mobile phones. In these modules, IC is designed by Qualcomm and manufactured by TSMC, while AiP (Antenna-in-package) module is designed by Qualcomm and produced by assembly and test companies, such as ASE and Murata. This shows that, in fact, Taiwan already has enough capacity and a compliant industry chain in terms of production. This is an excellent foundation for Taiwan.

However, regardless of LEO satellite or 5G module production, the biggest problem is not on the production side but on the test side: Taiwan has no say in the test schemes and standards but can only accept them unilaterally.

Take Qualcomm’s QTM module test as an example: Qualcomm has developed a QDART standard system where a test company must pay a registration fee to Qualcomm and provide equipment to Qualcomm for certification if it wishes to introduce its solution into the QTM test so that manufacturing factories can adopt the solution.

While the LEO satellite ground receiving station is manufactured in Taiwan, the overall assembly and test is handled by SpaceX itself. Therefore, if Taiwan can provide a complete one-stop production-to-test solution, or even has a say in test standards, its importance in the entire manufacturing chain will increase.

So, what are the difficulties we are facing in terms of tests and what is the focus? Why is there no good test scheme now?

At low frequency (Sub-6 GHz), the antenna and the system circuit are manufactured and tested separately, and the system test is not carried out until the final stage. In other words, the performance of antenna and system circuits can be ensured separately, and they are classified according to different product stages in manufacturing. Therefore, there are not too many problems for large-scale manufacturing and testing.

However, at mmWave frequencies, an antenna array is composed of multiple antennas, and due to the high loss characteristics of mmWaves, the antenna array must be integrated with the system circuit from the early stage to reduce loss. That is why Antenna in Package (AiP) has emerged as the mainstream antenna packaging technology for mmWave applications.

Simply put, Antenna-in-Package = Antenna array + System-in-Package. Because the antenna is assembled with the system circuit from the beginning, the traditional conductive testing method is not applicable. Instead, all measurements must be using over-the-air (OTA) test methodology, which poses a big challenge to mass production.

Traditionally, antenna testing is performed in a so-called microwave anechoic chamber. A complete antenna radiation pattern test usually takes at least 30 minutes. Imagine, if there are hundreds of millions or even billions of modules, how long will it take to perform the test? How much will be added to the operating/space cost? This is one of the problems that must be solved before mmWave is adopted in the civil market.

Since inception, TMYTEK has focused on mmWave technology. With an anticipation that it will create a huge business opportunity after technology transfer, we have also identified a critical issue that needs to be solved yet lacks any satisfactory solution, that is how to reduce the cost of testing mmWave array antenna modules in mass production. That’s why TMYTEK has decided to put effort into this area.

After more than two years of R&D and repeated verification, TMYTEK released its innovative yet mature enough mmWave OTA testing technology—Xbeam to the world on November 20, 2020. The main feature of this solution is that the test time can be reduced from 30 minutes to 10 seconds. This breakthrough allows the mmWave industry to greatly increase production capacity and lower the cost of testing in mass production. After the launch, TMYTEK has been actively promoting this technology to be included in the standards for mmWave OTA testing in the future.

In addition, TMYTEK has long been accumulating the AiP/AiM design energy, especially the modular design technology. When it is combined with Taiwan’s industry chain and Xbeam testing technology, we can offer the most cost-effective solution to the global satellite/5G mmWave supply chain. With this complete solution, TMYTEK hopes to further engage in clients' specifications and even join the global community in formulating specifications.

To conclude, whether on the application side or on the industry chain side, we need the government to help integrate resources and organize an effective team in order to formulate an effective strategy and be competitive in the global arena. 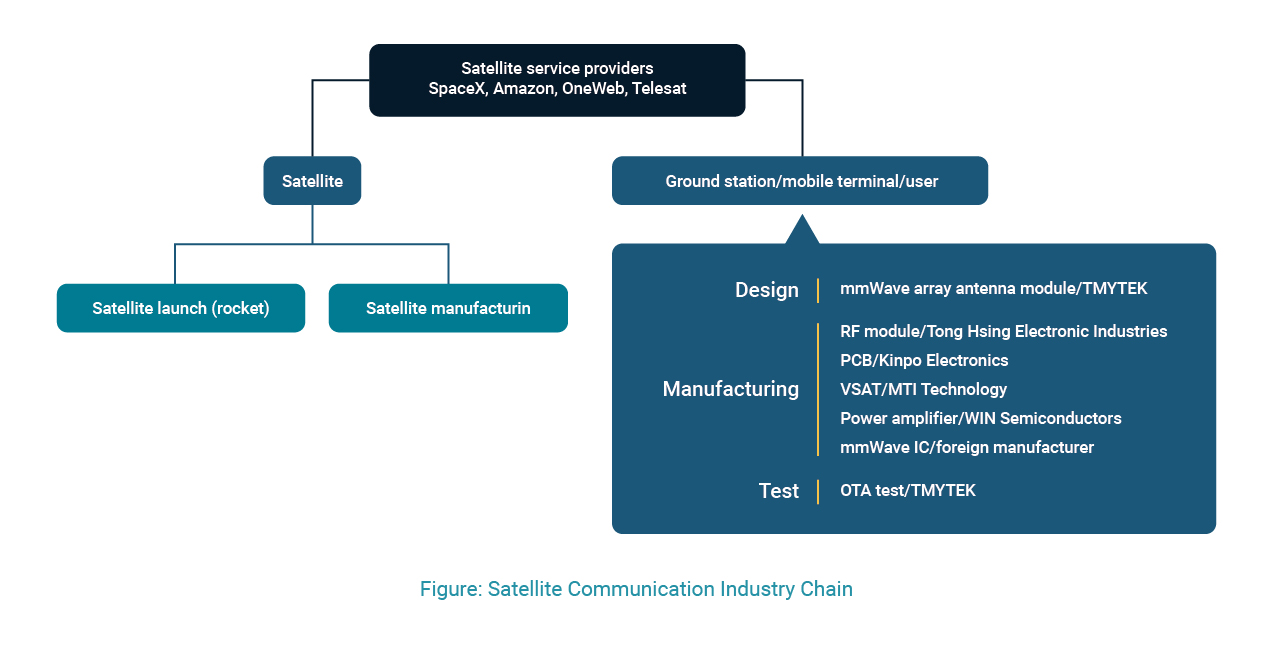